Tobed Mudejar architecture celebrates on december the 20th anniversary of its declaration as a World Heritage Site Unesco.

This is part of a double international anniversary, 35 years of recognition of the Mudejar Architecture of Teruel, in 1986, and 20 years of the extension of the international brand to all aragonese territory that incorporated six buildings of the province of Zaragoza, in 2001.

The number of properties recognized as highlights of world heritage was key to understanding the true dimension and meaning of Mudejar art in Aragon.

While the incorporation of La Seo del Salvador, the church and tower of the parish of San Pablo and the palace Aljafería in Zaragoza put the focus on the origin and diffuser mode of islamic tradition, as well as on the entrenchment of style; distinguishing the collegiate of Santa María in Calatayud, the church of Santa Tecla in Cervera de la Cañada and the church of the Virgen de Tobed in Tobed expanded the territorial focus of the international declaration, projecting it on rural places to which it endowed with a new dimension. 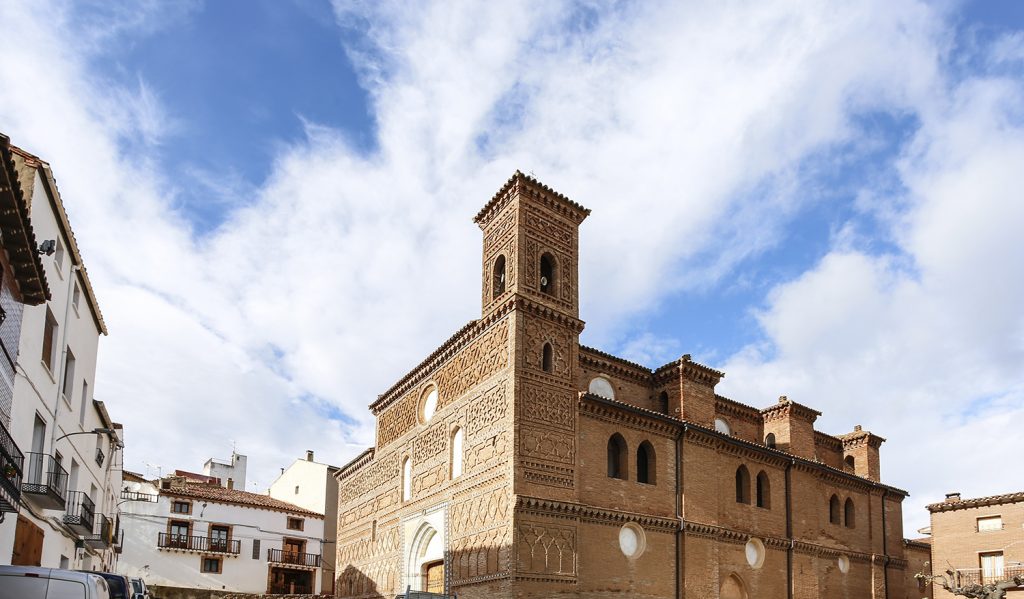 Tobed is located in the heart of the Grío river, between the mountain range of Vicor and Algairén, and has become the model of local management and development by building a project in which the inhabitants develop their lives and economic activities by bringing history, art, education, landscape, traditions and people to generate their own identity and wealth.

An example is the creation of the Espacio Mudéjar Mahoma Calahorri, a museum of the history of the Mudejar of Aragon in the Palacio del Prior, which has created an active space and international relations on the management of world heritage from Tobed. But, without forgetting, that a heritage development project cannot exist without the maintaining inhabitants and the effort made for decades from local administration and active economic activities such as agriculture, beekeeping, blacksmithing, artisan ceramics, commerce, local gastronomy, hospitality to the traveler and care for the elderly in a professionalized way.

The church of the Virgen de Tobed, paradigm of Mudejar fortress church, was started to build, in 1356 under the ownership of the military order of Santo Sepulcro, with the sponsorship of Pedro IV of Aragon, the kings of Castile, the archbishop of Zaragoza, Lope Fernández de Luna and the pope Benedicto XIII, Papa Luna; counting on the best masters of the moment Mahoma Calahorri and Mahoma Rami.

The potency of its exterior, of compact volumetry, shows us one of the best examples of religious and defensive function.

If the exterior shows us a spectacular enveloping facade and a compact defensive volume, in which stand out the round road in height and the buttress towers open with saeteras, the interior surprises us by the delicacy and elegance of a Mudejar space in its purest state characterized by the diaphanous, the verticality, the agramiled and painted decoration of its walls , as well as a magnificent carved and polychrome wood pottery that has come to this day, almost whole, since the 14th century.

The influence of the military order of Santo Sepulcro in Tobed is visible throughout its urban area which, while striking for its simplicity and appearance as a “white towns”, preserves constructions of important works of the Renaissance such as the Lonja, the parish church of San Pedro and the Palacio del Prior from the Baroque period.

The town also retains other elements of interest such as the tower of the islamic castle and the hermitage of San Valentín on the ridge of the Sierra de Algairén and as ‘watchman’ of the Sierra de Vicor, both of them, natural spaces in which the town is integrated magnificently. 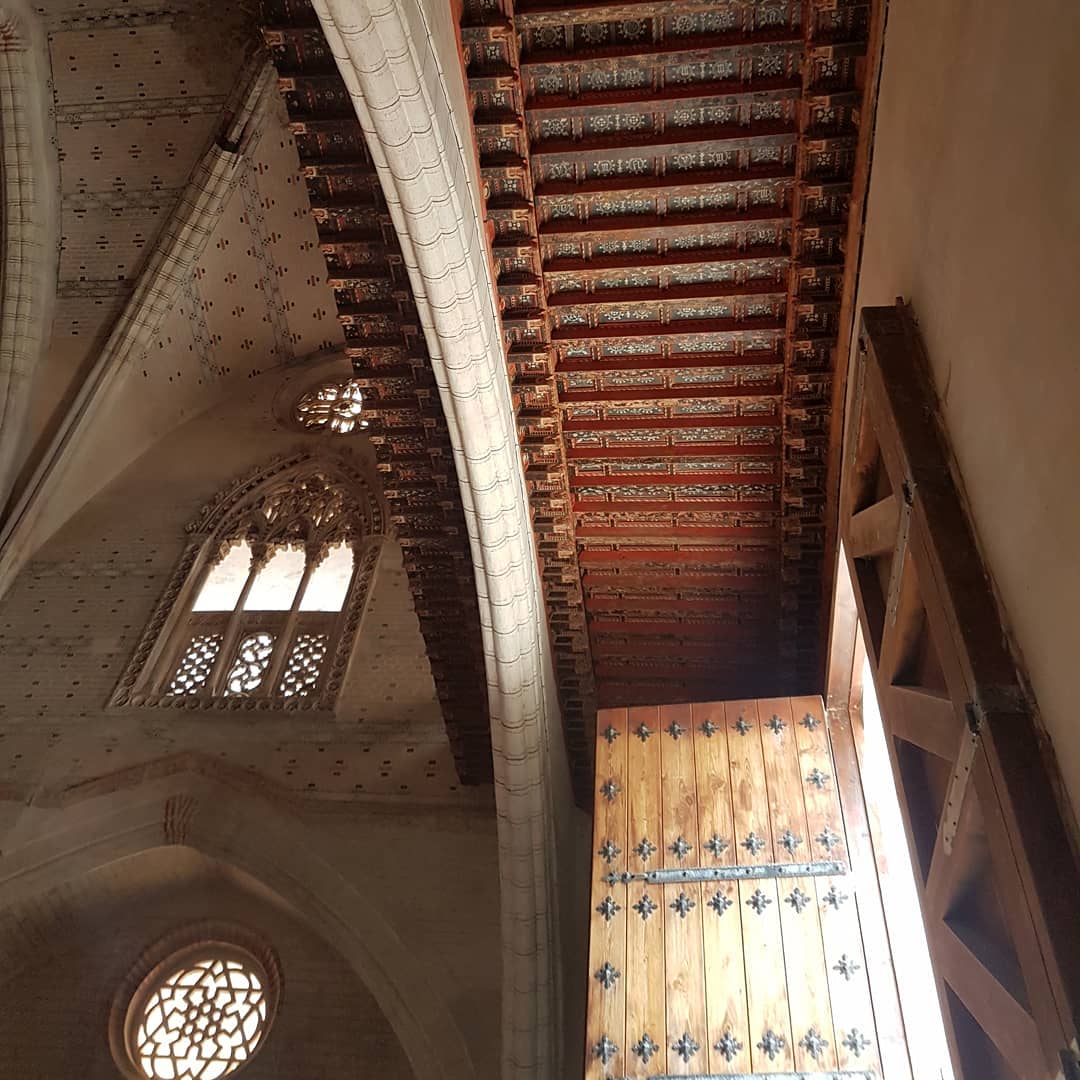 The INTERNATIONAL CONGRESS ‘FROM IDENTITY TO IDENTITY’ is a project of scientific dissemination framed in a strategy that uses the management of the Unesco World Heritage brand as a sustainability tool with which to work from a local development perspective and from the use of its historical-artistic resources for the improvement of the quality of life in the locality.

If in the first two editions, 2016 and 2018, we addressed topics that  outlined, the first, the management of identity strategies through the claim of the historical heritage space as a natural space and context of displaced movable goods and, the second, the need for a definition of current and future uses of world heritage at the local level as a local management and development strategy.

In this third edition the activity aims to achieve stability in a biannual format as an international meeting addressing reflections that definitively unsern the need for scientific research and management action from its own aspects and through local examples that, in essence, are universal problems of heritage management and allow us to generate international work forums to advance the path of work well done.

The special configuration of our activity, halfway between congress, scientific meeting and study visit has been defined to the extent of the place where it takes place. This very own format allows us to work outside of congress a whole battery of satellite actions that focus on the management of uses of the Church of the Virgin Mudejar World Heritage Site and to which the inhabitants of the town (permanent and non-permanent) have gradually joined by building a strategy of intergenerational social participation, unique and typical of Tobed. 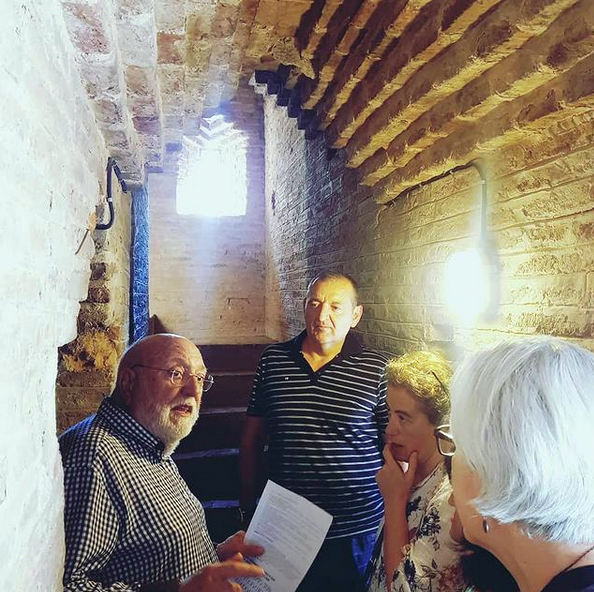 The World Heritage Tobed project owes everything to Professor Gonzalo M. Borrás Gualis. As scientific director of the management project in all its phases and the congresses of 2016 and 2018 we thank you for your momentum, its closeness and the great work that we develop every day for almost 14 years to reach today.

From identity to re-identity: the trades of Mudejar

The history of the construction of the church of Our Lady of Tobed offers us historical news of interest in which it is recounted that on December 30, 1360 Friar Martín de Alpartir, commander of the Holy Sepulchre of Tobed, would have hired Mahoma Granada, Moorish rejolero of Pedrola, the manufacture of fifty thousand rejolas or bricks in the town of Tobed.

Although there is a land architecture characteristic of the area and previous chronologies such as the surveillance castle built in tapestry, the arrival of the master rejolero in the town could be the beginning of the neighborhood of the Obradores where about 50 workers, a large number of ovens and work spaces such as the vases or footballs came into operation.

The trades of Mudejar: the earth architecture itself integrates three themes of development – population, economic culture and society – that allow us to understand the territory from a broad and diverse point of view on a path from Islamic tradition in the 8th century to delve into the 12th-XVI chronological fork and thus analyze the profound heritage that work with indigenous materials has left to this day becoming a professionalization of present and future.

The theme breaks with popularly entrenched topics and constitutes a vindication of trades, materials related to Mudejar art and the use of spaces that have traditionally dragged a consideration of “poor or cheap”, when what we find is a perfect knowledge of the resources and works that have come to this day with surprising integrity and that can only be explained by the quality of all the actors and factors surrounding , not only to mudejar construction, but to any activity of local tradition linked to the use of landscape resources.

Activities that we can link not only to the great theories of today’s economy such as “sustainable resource management” or the “circular economy” but even, and far from being utopian, we could relate to the 17 Sustainable Development Goals. And point out that the historical-artistic resources and, in particular, those declared as a World Heritage Site by UNESCO have been and are, by their uniqueness, source of wealth based on the identity of the territory and fundamental element for the sustainability of the local territory and its inhabitants, but always taking into account that these resources by their special definition should use specialized management tools for the use of resources in an orderly and conscious manner of their importance in the present and future history of people.

This third meeting seeks to delve into the past in order to offer real and viable possibilities based on the territory’s own idiosyncrasies through the presentation of Themes, Projects and Good Professional Practices of national and international scope linked not only to architects – masters of works at the time – and to the trades linked to construction, but the theme leads us to show a whole catalogue of trades that carry the Mudejar brand -lagajeros , goldsmiths, tters, omens, blusins, shoemakers, pickles, binders, linguists, jurists, doctors, traders, or any transformer of a resource – who introduce us to traditions in a current way. 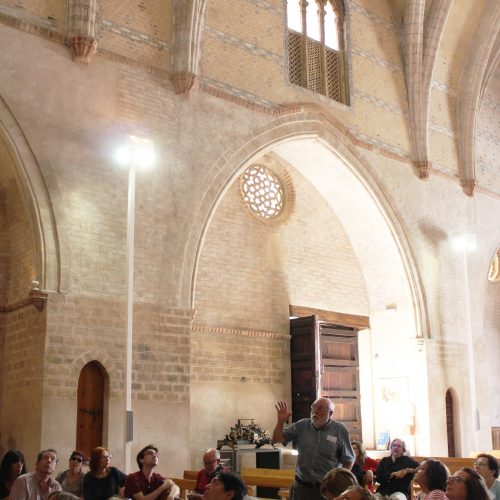 It will bring together specialists on several study visits that will serve to work on the exchange of knowledge and good practices on the management of Mudejar architecture, earth architecture and the impact of constructive techniques and offices of Islamic tradition on the development of the urban and landscape context in which the Mudejar church of the Virgin of Tobed is located.

A video summary of the visits can be viewed through our youtube channel. 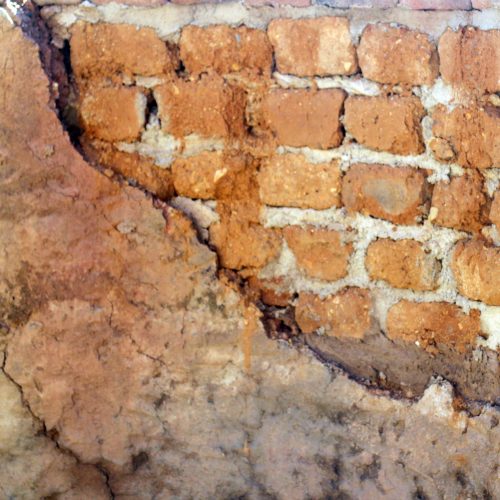 Linked to study visits with specialists, architects Pedro Bel, Javier Gómez and Laura Villacampa have designed an itinerary through the town of Tobed based on their research areas making strategic stops where to study the earth technique through the trial. From several key points of the town they will show us the existing local technique and the current way of doing the technique and applying it in current architectural projects.

A video summary of the itinerary can be viewed through our youtube channel. 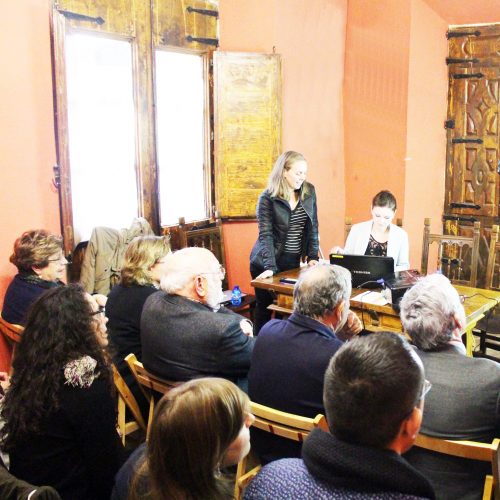 11.30 Victoria E. Trasobares. Conference. Tobed World Heritage Site. The Mudejar trade as a historical key to identity and the future.

12.00 Luis Alberto Longares. Conference. From observing the territory to understanding a culture.

The conference table can be streamed through our youtube channel.

If you need to certify your assistance here 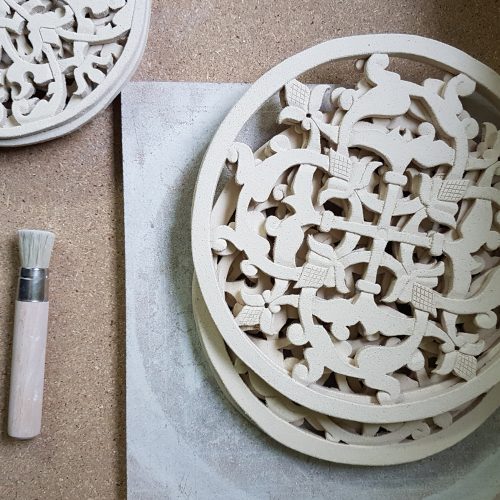 The ultimate purpose of the project is to know, analyze and disseminate the impact of Mudejar heritage on the historical, urban, population, economic development and, ultimately, on the local identity of Tobed.

To do this and starting with the craft of the land we have scheduled a series of interviews with some of the inhabitants of the town where we will know how the land was lived and worked in the town and how it is still present in the day-to-day economic today. Interviews will focus on agriculture, construction, crafts and education.

All interviews can be viewed through our youtube channel.

Art Historian. Professor and professor. Specialist in The Guardianship of the Historical Heritage and, in particular, in the urban and territorial dimension of the real estate.

Architect. Professor and professor of architectural composition, specialist in architecture, heritage and management for sustainable development.

Architect. Doctor of History and criticism of architectural and environmental goods, she is a professor and specialist in restoration, memory, monumental identity.

Architect and academic number of the Royal Academy of Nobles and Fine Arts of San Luis and the Academy of El Partal. Specialized in monumental restoration.

Geographer – Professor in Geography and Land Management. Specialized in climate, global change and natural systems from the physical geography applied to the management of the territory, the management and conservation of natural areas and biodiversity.

Architect. Researcher and professional specialized in the restoration of architecture and conservation of the architectural heritage of land.

Architect. Researcher and professional specialized in restoration and management of new uses of popular vernacular architecture.

ONLY IF YOU NEED TO CERTIFY ASSISTANCE

Sunday’s Conference Table, March 21, will be broadcast open through our YouTube channel from the Mudéjar Mahoma Calahorri Museum in Tobed.

If you would like to receive a certificate of attendance at the conference table, please send us the registration form that we attach and we will inform you.

Attendance will be certified by the direction and coordination of the congress as a “Private Course” 6h. 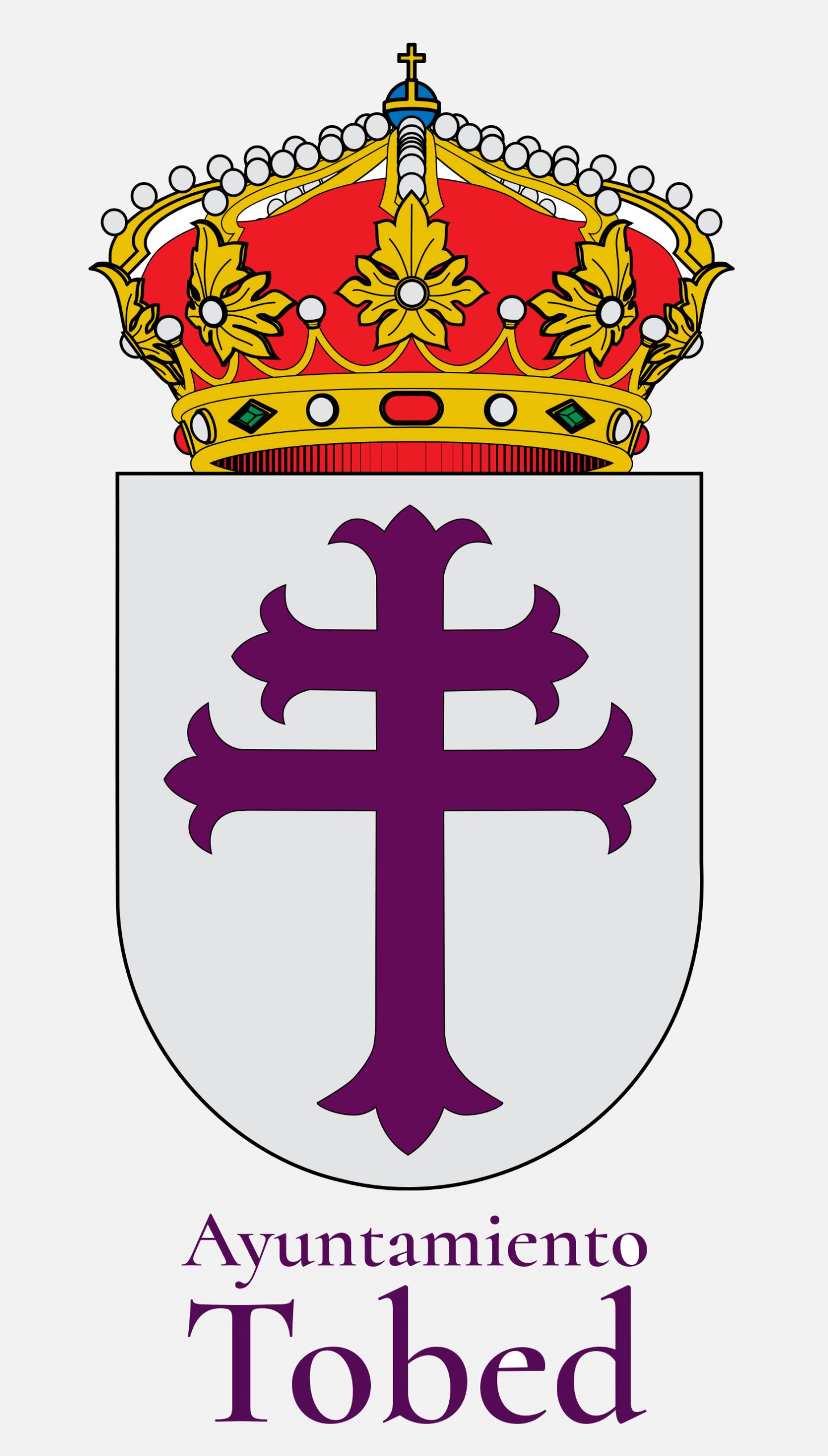